We had an eventful Valentine's Day this year. No flowers, or dinner and a movie. Nope, we spent 3 hours at Prosser Memorial Hospital with our youngest son instead. He decided he wanted to see if he could fly! He stood on the rail of the upper bunk bed and jumped off. The boys had their pop-up tent set up in their room and he was trying to land on it. He forgot that the toy shelf was under the tent and he landed face (nose) first onto it. Monte & I were in the living room . . heard a thunk . . . then a wail. We rushed to see what happened and saw Andrew headed out of their room with his nose gushing blood. We got it stopped enough to see the damage and saw that he needed to go to the ER. Our neighbor gave him a quick blessing and we headed out.
This is an extreme close-up of Andrews nose taken at the hospital. What appears to be a stream of blood coming out of his nostril is actually a 1/4" deep cut that starts inside his nose. they sealed it up nicely with a tube of DermaBond. 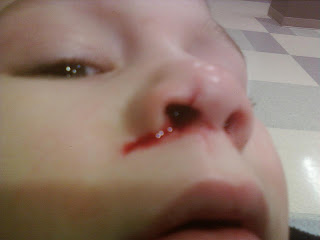 Waiting for the Dr. - He was happy that we grabbed his blankie on the way out.
"I thought I could land on my feet."
. 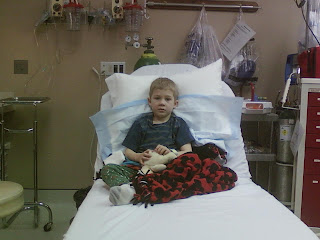 After taking X-Rays, we discovered that his nose is broken :( So Andrew is the first of his siblings to have a broken bone. I'd say that this was a rough one to start with!
This is the morning after . . it's still very swollen but shows no sign of bruising yet. It does still bleed a little bit. He is not quite his usual self today, but it's got to hurt, so we'll let him lay low for a day or two. It's the least we can do. 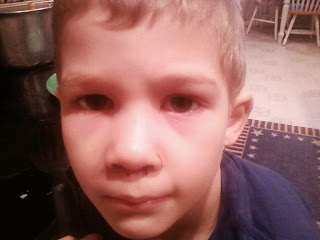 Posted by momofmonkeys at 7:44 AM

ohh man! that's not the best valentines day! I love your family picture at the top. Stephanie does a great job!

Good greif!!! It makes my nose hurt.I know what it's like to have a broken nose and two surgeries to correct it. Poor kid and parents. Hope you have a better week. I really enjoyed your visit Saturday. You are a great friend.

So sorry about Andrew's nose. Hope he gets feeling better. On a side note, I LOVE your family picture! Very cute!

Not sure why the comments say Chris not Amy

Stacy-
Poor Andrew! These pictures really do make a person's nose hurt. And you sound like you handled it calmly. Kudos to Stacy!