There's always that one gift that one of your kids asks for that is either a) too expensive or b) hard to find. This year was no exception. Meet the vest: 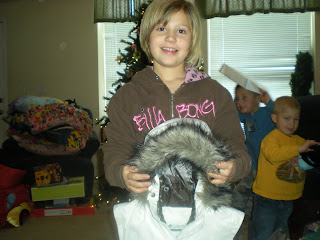 This vest was the most difficult thing I've ever had to find for one of my kids. About 2 months ago we were in Sport Authority and Natalie found this vest - she wanted it soo bad. But, it was $90! There was NO way I was buying an 8 year old a $90 vest. A snowboarding jacket? Maybe, but not a vest! So I told her to ask Santa and she did. All she wanted was a white, hooded (fur lined hood) vest. I thought "No big deal it should be easy to find - I've seen them everywhere." Boy was I wrong! They were everywhere last year. I searched the internet, eBay, overstocks, amazon - everyplace online that I thought might have one. I went to Target, Costco, ShopKo, Fred Meyer, TJ Maxx, Ross, Burlington coat Factory, Old Navy, GAP kids, Gymboree, TCP, Limited Too, Sears, JC Penney, Macy's . . I even went into Value Village I was sooo desparate to have one for her. I had my friends and mom out looking for it too! I asked her, "If mommy can't find you a white one, what else do you want?" Her reply? " A brown one." UGHHH I was soo frustrated by my search and vented to Monte one day about 2 weeks before Christmas - he says "We're going to Sport Authority and just getting the darn thing then!" ACKKK Even when I explained that it was $90 and she's only 8 and blah blah blah . . he said " I don't care. It's all she's asked for." ( Yeah she's got him wrapped around her finger!) So we went to Sport Authority. And low and behold they still had one (no wonder there - who's gonna buy it for $90?) Not only did they have her size, but it was ON CLEARANCE!!! WOHOOO happy dance!!! So that is how Nat got her vest - whether you wanted to know or not:)

Posted by momofmonkeys at 6:11 PM

I wanted to know.
-Mary

Beautiful - love awesome deals! That is super fun - and everyone is hap, hap, happy!! =)

errgg don't you hate when you just HAVE to buy something because you know they want it and you're like..OKAY!! giggle giggle..it's way cute by the way!!

There is a chance you are eligible to receive a $1,000 Amazon Gift Card.