At Colten's school, the kinders have been "raising" butterflies in their classrooms. After the butterflies have emerged they have a release party. It was yesterday. The kids all made their own headbands to look like a butterfly. As we were waiting to go outside to the park I heard Mrs. Childers (Colten's teacher ) say to one of the kids . . " Don't pull on your proboscus!" I thought to myself " Self . . what the heck is a proboscus?" Then I looked at the kid who was pulling his proboscus and figured out that it's the curled up brown thing on the front of their headbands. Colten explained it all to me later that it's how the butterfly's smell and other such features. It was then that I realized that my kinder is smarter than me. He has vast knowledge of a butterfly's life span, how to spike his own hair and knows how to re-attach the chain on his bike. I, on the other hand, can drive the lawmower. That must put me at least 5 points ahead . . right? Yeah, I'm not convinced either. 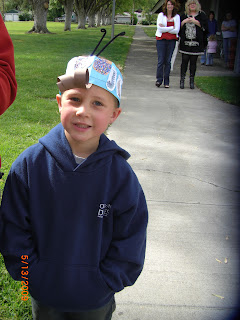 I snuck into this picture with him! 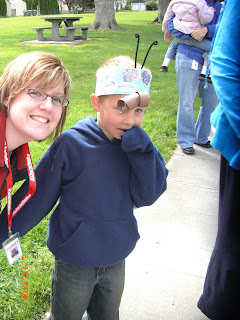 We also had a lovely cake. It was HUGE. With lots of thick yummy frosting. This is an extreme close-up of the cake. (hehehe Laura's camera was on zoom!) 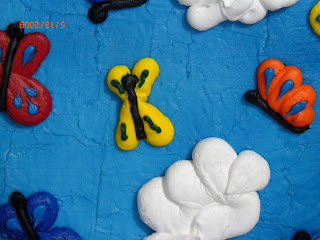 Me after cutting the cake into 80+ little pieces and serving them on the kids' plates with only a fork and my fingers for utensils. (At least we had a knife to cut it though!) 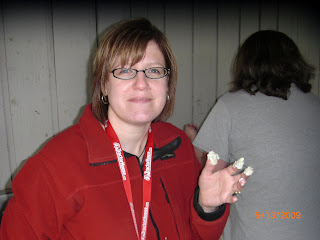 Oh and I let my friend Kari help with the cake too. Just kidding - she's the one who called me! 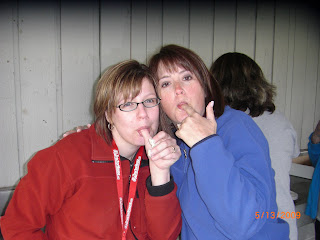 Mmmmmm that frosting was YUMMY!!!!

** Special thanks to Laura Ripplinger for the pictures. Apparently I only remember my camera when tragedy strikes - like when your friends son takes a header over the top of his handlebars. Check out the Clifford's blog to see Ethan's big fun day yesterday!

Posted by momofmonkeys at 2:38 PM

Are we smarter than a Kindergardener? Not so much (LOL).

I knew that looked funny! UGH!

Ahhh, Stacey, you look so great. I miss seeing your face in the house next door! Glad the kids had fun!

That looks like so much fun...why didn't you call me to help you with the cake? :) It looks YUMMY!

hey Stacy, you look so good. What a fun day! Miss you!

Nothing like good friends and fingers full of frosting!!!