The Kiddie Korner preschool kids had an open house where they wore their Halloween costumes and sang some songs. They all were sooo cute! I had videoed Andrew on stage, but the next morning we discovered that I had taped the wrong Batman! OOPS! It seemed to be the most popular costume this year as there were about 8 of them in the bunch. So much for my being able to pick my own kid out of a crowd. Wonder how I would do as a police witness and a line-up?!? LOL
This is Andrew with his AWESOME teacher, Liz Elliot. 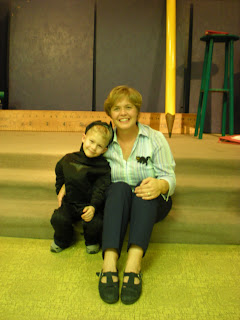 The KK kids also went out toYellow Rose Nursery for a haunted forest, a "hay ride", games and a plant in a pumpkin activity. We invited out friend Ethan to join the trip. 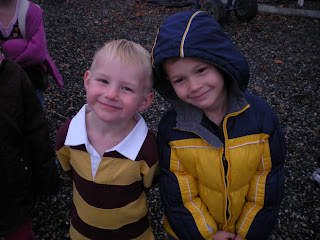 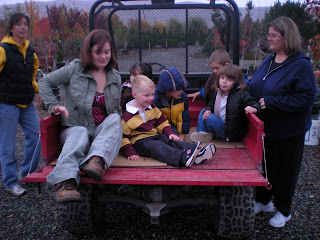 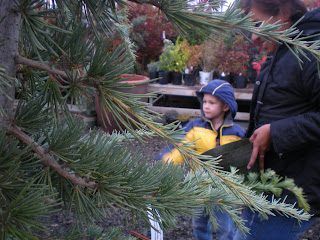 Posted by momofmonkeys at 8:50 AM

I am cracking up you video'd the wrong kid!!! that's good mom funnies! I love the gangster party thing..You looked awesome! That's a fun tradition! sounds like you had a fun labor day weekend. I hate camping, you are an awesome mom for doing that. Ohh and whoever Ethan is, that is one sucky camping trip, I would be begging to go home with that luck :)

I agree: AWESOME teacher!! Liz is an AMAZING preschool teacher. I will forever be grateful my Joseph had the opportunity to have her as a teacher for 2 years! I am peeking at your blog without being invited--hope you don't mind.... :)